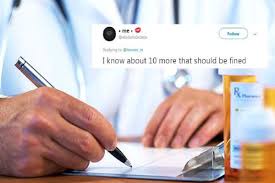 Doctors are known to have unreadable handwriting usually so difficult to decipher, especially when prescribed lists of drugs to buy. Most times, only someone in the medical profession can the decode doctors’ writing.

In an article by Punchng,a doctor’s handwriting can mean difference between life & death for a patient, as sloppily written prescriptions can mislead or dosage wrongly interpreted. It is therefore not surprising that s certain percentage of death every year is attributed to doctors’ handwriting.

Doctors definitely wouldn’t intentionally want to obscure their writings just for no reason. Besides, it is the joy of every doctor to see their patient get well after treatment.

This article examines 3 major reasons for the illegible handwriting of doctors.

Tough training in the medical schools.

Though doctors may begin their medical training with fine handwritings, things take a turn as they walk through medical school. In the lectures halls, they follow up every tiny dot of what the lecturers who are also doctors say. In exams, there is often limited time allocated to come up with answers to a large volume of questions. These, together with the so much workload they have to study, they eventually lose their once “fine” handwriting.

In the medical profession, if it’s not documented, it didn’t happen. In other words, every detail is considered significant. Any omission could cost a patient’s life. This makes it one of the highest writing jobs. There’s a large volume of things write, ranging from patients’ basic introduction, test results, summaries, cards, drug lists, referral forms, x-ray slips, and even research works. Thus overtime, they eventually eventually lose their once legible handwriting.

Many Patients to see.

Some doctors still have legible handwriting even after medical school. However, the bulk of the work begins when they begin to work in the hospital, being that they have many patients to attend to. A doctor doesn’t have the luxury of time & attention to pay to the “beauty” of what they write. While writing and attending to one, there are still hundreds outside waiting for him.

In summary, doctors usually start out with beautiful handwriting until it wanes out with time. It should however be noted that not doctors have the so-called “bad” handwriting. It is hopeful that with time, more of written documents would be more of electronic to limit the extent of “mis-readind” writings.

Even though no profession is totally free of “errors”, it can be confidently said that the medical field has indeed being a blessing to mankind.