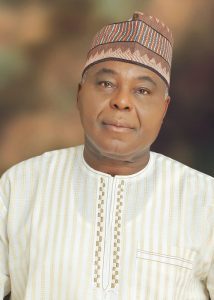 Member of the President Buhari/Osinbajo nationwide supporters group Raymond Dokpesi has written to the Governor of Delta State, Okowa, to signify his intention to decamp to the People Democratic Party (PDP) during the PDP mega rally in Delta.

This move comes as a surprise to many, as the Dokpesi has been a staunch supporter of the ruling All Progressives Congress (APC) for many years.

The letter, which was made public by the Governor’s office, states that the members of the President Buhari/Osinbajo nationwide supporters group have become disillusioned with the APC and its leadership. 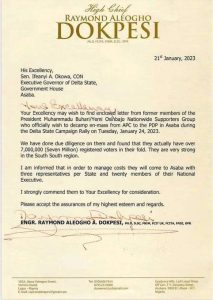 He cite a lack of progress on key issues such as poverty, unemployment, and security as reasons for their decision to leave the party. They also express disappointment with the APC’s handling of the economic crisis and the ongoing COVID-19 pandemic.

The members of the President Buhari/Osinbajo nationwide supporters group express their admiration for the leadership of the PDP, particularly the Vice Presidential Candidate, and their belief that the PDP will be better able to address the issues facing the country. They also express their support for the PDP’s manifesto and its commitment to good governance, transparency and accountability.

Hopefully, the PDP will welcomed the decision of the President Buhari/Osinbajo nationwide supporters group, regardless of their political affiliation, in other to build a better and more prosperous Nigeria. The PDP has also stated that it will work to address the issues that have led to the disillusionment of many Nigerians with the APC government.

The decision of the President Buhari/Osinbajo nationwide supporters group to decamp to the PDP is a significant development ahead of the mega rally in Delta, and it is likely to have a significant impact on the political landscape in the state and the country as a whole.

It is a clear indication that many Nigerians are becoming increasingly dissatisfied with the APC and its leadership, and it is a sign that the PDP is making inroads in its efforts to win the hearts and minds of the Nigerian people. 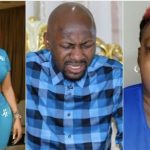 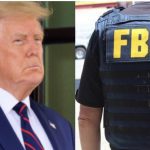